One of the first things I did in my freshman year of college was to march across campus in protest of the university’s investment in South Africa.  This was a time of apartheid, and Nelson Mandela had been imprisoned because he was striving for equality.  In the 1980’s, many years after our own country had corrected the Jim Crow laws, South Africa still severely limited rights for blacks.  They finally changed their system, resulting from divestment from countries, businesses, and universities, as well as the work of activists like Nelson Mandela.  In 1990, when the South African President F.W. de Klerk finally was ready to give South African blacks the rights they deserved, he freed Nelson Mandela and taught him how to be the next leader.  Both received the Nobel Peace Prize in 1993, and Nelson Mandela became President in 1994.  In 1999, he resigned and handed power to younger leaders, to set an example of democracy.
Nelson Mandela is a hero for so many reasons.  He fought for what he knew was right, at the great risk to his life and liberty.  He gave up 27 years of a quality life for the sake of his country and future generations.  He did not let anyone break him.  From prison, he continued his work, and when released, he became president.  He could have led violent protests but instead, led a peaceful change for South Africa and advocated a country of inclusion of both the black majority and white minority.  He also emphasized quality education to lift up the black population into leadership positions.  He persevered while facing extremely difficult obstacles, and was an effective leader and negotiator, one to be admired throughout the world.  Nelson Mandela’s traits and accomplishments are a great inspiration for all of us to make the most of our own lives. 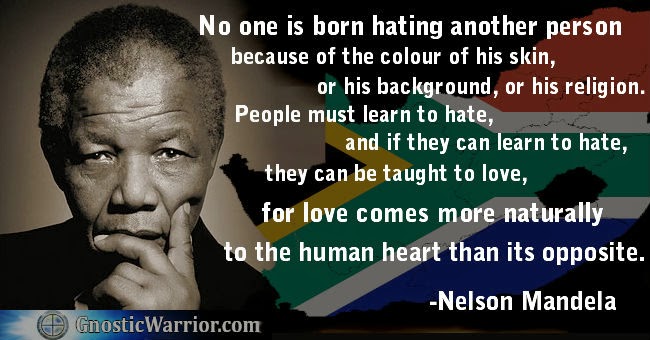